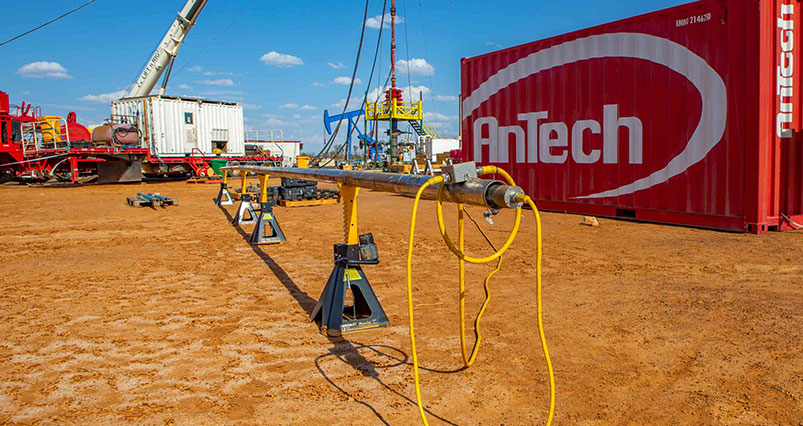 Oilfield operations have been under constant economic and societal pressure to strip itself from unnecessary costs from interventions and become as efficient as possible. In the modern environment, producing the last drops from existing assets by re-entering and drilling laterals in existing wells is a pragmatic and economically advantageous approach if done cost-effectively. Coiled Tubing Drilling (CTD) is a technique that offers improvements in efficiency in many operational areas compared to conventional drilling but remains underutilized as a technique. This article describes how CTD technology can offer efficiency gains and cost reductions that operators can take advantage of.

A track record of success

CTD technology thus far has been widely used in two regions – Alaska and the Middle East. However, in lower 48 the technology is still underutilized and has not yet reached broader application. This article will summarize how bypassed reserves can be approached using CTD technology, often called Rigless Drilling. This technological approach not only provides an operational flexibility that considerably improves the prospects of success of drilling a new lateral wellbore in a depleted field, but it also often reduces a payback period that can be measured in a small number of months.

One of the crucial advantages that CTD technology provides is its capability to drill in truly underbalanced conditions either through new wells or re-entry of existing ones. Drilling conventional wells with declining production in underbalanced conditions have proven to be very successful in the Middle East, where a number of CTD rigs have been slowly increasing over the last decade. Producers in the North Slope of Alaska can boast to be one of the most successful applicants of a low-cost method of re-entering old wells and increasing production using CTD, dramatically increasing the number of marginal barrels available to them. 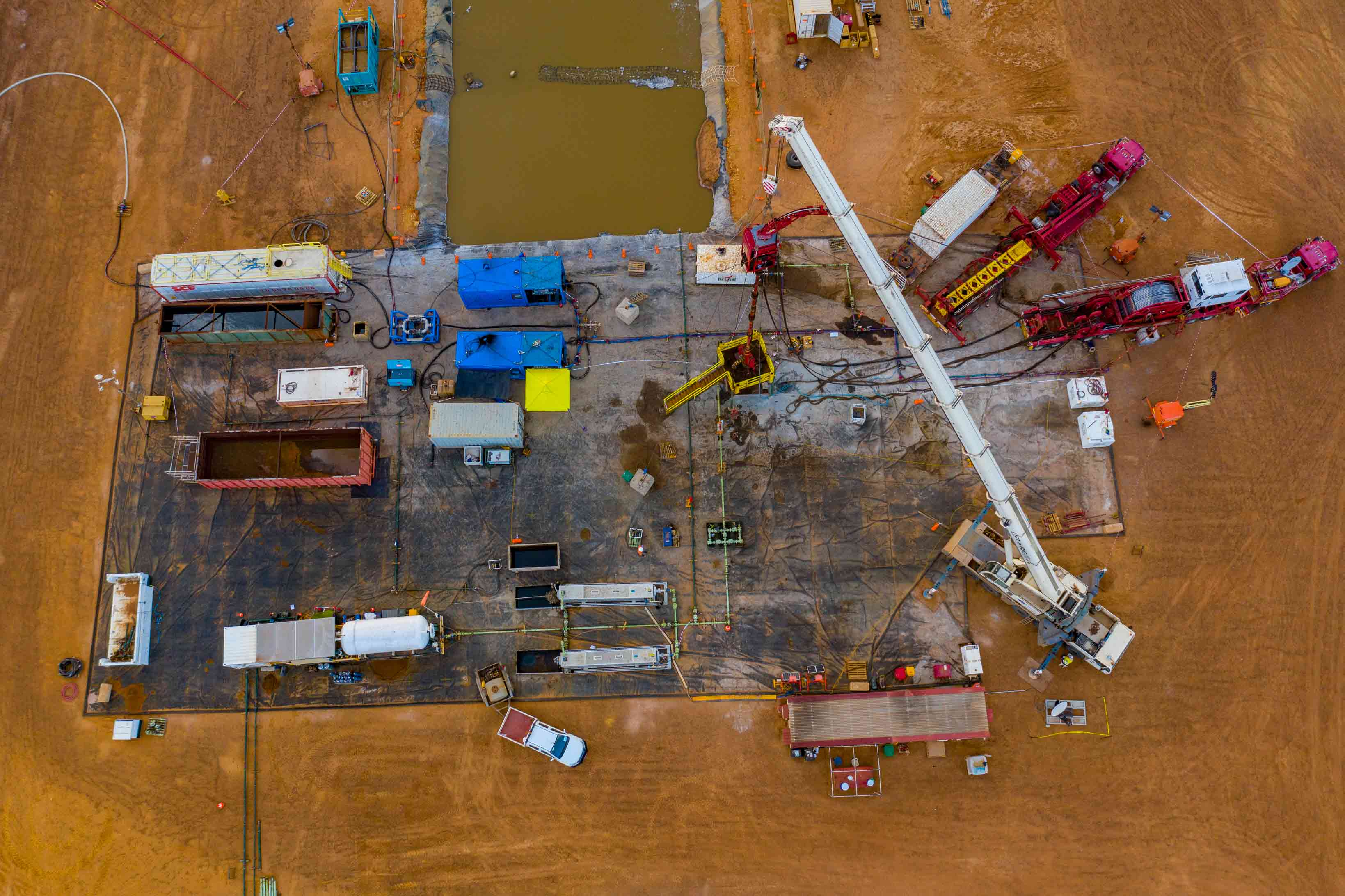 There are two ways in which CTD can be more cost effective than conventional drilling. Firstly, in total cost per barrel which is less through a CTD re-entry than through a new infill well. Secondly, through a decrease in inconsistency in well costs due to the flexibility of coiled tubing.

Coiled Tubing Drilling can be applied to carry out complete well drilling operations, however, it can also work in combination with workover unit and wireline depending on economics of the project. Correct pre-planning and analysis of the availability of service providers in the area can bring many benefits in terms of operational time and cost.

The most practical solution in North America is to carry out steps 1 to 2 with a workover unit on multiple wells prior to running a drilling BHA on a coiled tubing unit. Drilling open hole laterals with a CTD package can be as short as two to four days, total, depending on the target formation. So, it is possible to perform steps 4 and/or 5 with a workover unit following behind the CTD operation, therefore, having both service providers fully operational in tandem.

It is prudent to run cost and service availability analysis prior to commencement of any drilling operation to find the best cost-effective solutions and reductions. Depending on location of the operation, various cost reductions can be found. Even if the reduction seems to be slim compared to the major costs, it can still have a significant impact on the total cost of the operation.

Depending on a particular situation, it could be advisable to carry out non-drilling operations on a workover unit, yet, in some situations having a coiled tubing unit complete the whole drilling operation from the beginning might be the best solution. There are locations where it is feasibly cost effective to have two fluids return packages – as you are drilling on the first well, you can rig up the second and have the fluids package leapfrog from the first to second well, reducing the rig up time on each well and keeping the costs down.

An unmatched capability to control pressures

Since coiled tubing does not require any connections to be made, this allows the CTD application to be the only technology capable of controlling pressures at all times. Designed for underbalanced operations, CTD unit allows for downhole pressure to be managed as a standard with the utilization of a choke, allowing to quickly switch from overbalanced, managed pressure drilling operations to underbalanced operations.

The limitations in the lateral length reach using CTD have now been substantially boosted with the assistance of a Continuous Rotating Orienter in the BHA and extended reach tools and utilizing larger coil diameters e.g., 2-5/8”. This progress has been demonstrated in a recent project on the North Slope of Alaska where lateral lengths exceeding 7,000ft were achieved. 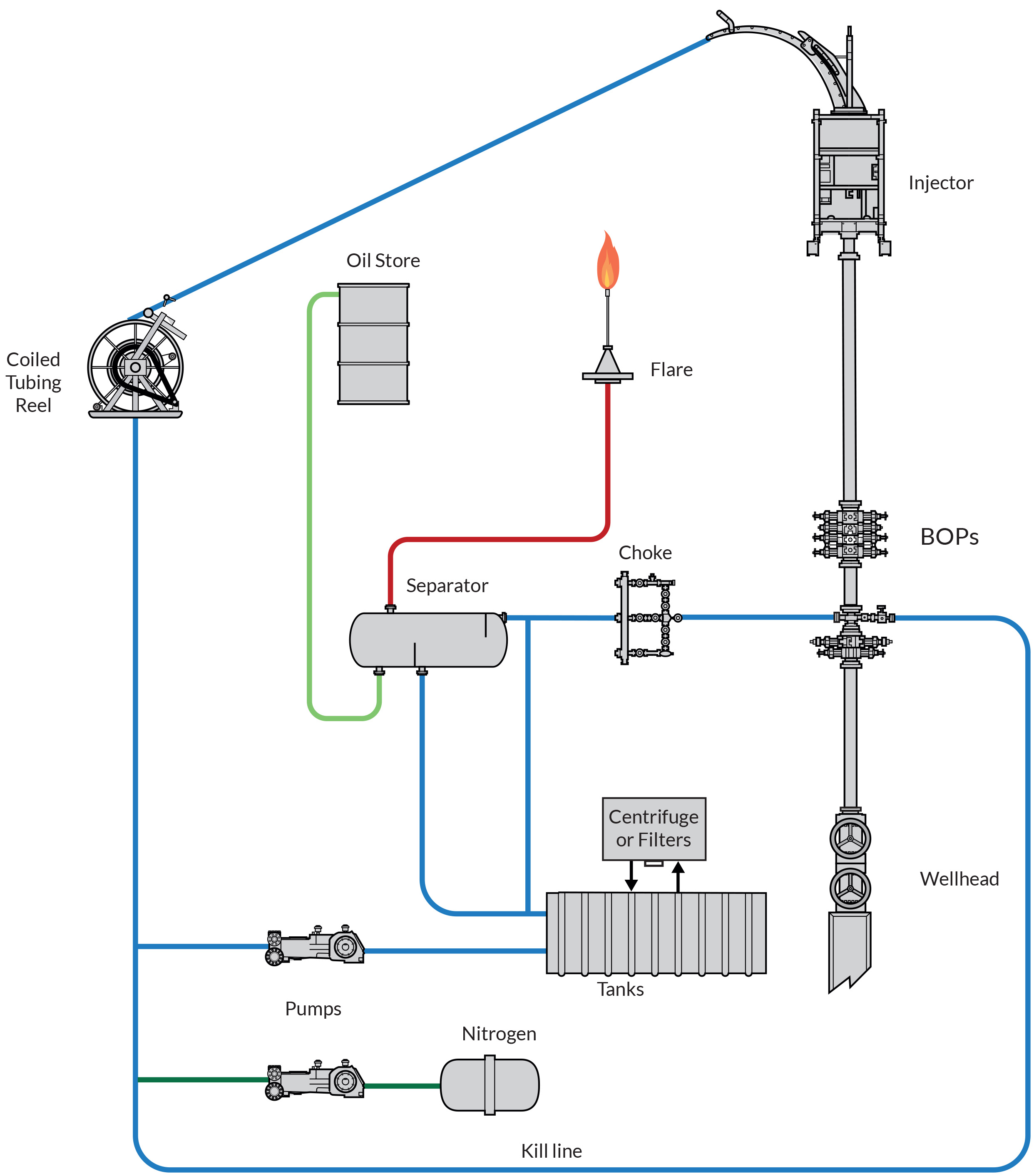 Equipment required for a CTD package

Depending on the job requirements, equipment required for a CTD package may vary, but variation primarily comes from the fluids return side. If the job is going to be in an underbalanced condition, then a nitrogen unit can be easily connected to the pump, ready for a switch to two-phase drilling. Nitrogen pumps are easily mobilized in most locations in the United States allowing operational flexibility and keeping the costs down if there is a need for underbalanced drilling operations.

A choke manifold is a standard component on all coiled tubing drilling operations that allows control of the bottomhole pressure. It is installed downstream of the BOP stack. Next piece of equipment in line is a separator. A simple mud gas separator is used in overbalanced operations and can be bypassed when dealing with well control situations. A more complex 3- or 4-phase separator can be put in line when there is a plan to go underbalanced. It can be rigged in from the beginning or drilling can be halted for placing it in. A gas flare should be installed at a safe distance linked up with a separator.

Next in line are the fluid tanks that act as the pits. These can be simple open top frac tanks or the production tank farm, if possible. Usage of shale shakers is diminished due to small volume of cuttings on a CTD re-entry job. Most of the time the cuttings will settle out in the separator or in one of the frac tanks. A weir tank which has baffles installed in the tank to assist with separation of the cuttings can be used if separators are not utilized. A centrifuge is then connected to the final stage to remove the remaining solids before recirculating. Depending on the desires of the operator, the mud can be either bought pre-mixed or a mix tank can be included in the tank/pit structure to mix a simple, solids free mud, which can then be moved and used on the next well after completing the first one. This would require the mix tank to be set up only once.

Drilling fluids can be another cost saving factor when using CTD drilling. Predominantly the required fluid is simple, solids free, such as inhibited brine with polymer that is standard for overbalanced or managed pressure applications. Compared to drilling mud used on conventional rigs, this type of drilling fluid should be significantly lower cost. If there are any fluid losses during the operation, this in turn, also minimizes costs associated with that.

During an underbalanced drilling operation, a single phase or a two-phase fluid can be utilized. The reservoir pressure and well design program will define type of fluid that is going to be circulated. Single phase fluids for underbalanced drilling are water, brines, oil, or diesel usually. Each one of those can be lightened further by pumping nitrogen at the same time.

Another benefit of running a CTD package can be found in reservoir damage issue. By drilling underbalanced, an operator can substantially enhance the production and avoid any skin damage/plugging, eliminating the need for the costly stimulations, even if it initially seems that drilling with single-phase fluid is less expensive. However, looking at final economics and results can have a much higher benefit in the end.

Reducing rig up and deployment times are essentially important. One of the two important considerations when choosing a bottomhole assembly (BHA) for CTD is the total length of the BHA. Deploying the entire BHA above master valve can only be achieved with a short enough BHA. The sequence would then start with placing the BHA in a mousehole, and bringing the injector and lubricator held by crane over the mousehole to suck in the BHA into the lubricator upon connecting it to the coiled tubing pipe and wireline via a cablehead. The Injector and lubricator with the BHA inside of it are then moved over the well and BOP connections are made up. This makes the deployment safe and fast, avoiding any need for a tower or pressure deployment.

The second important consideration to account for is the tortuosity of the wellbore, in other words, how straight the drilled wellbore is. The straighter the wellbore, the deeper the operator can drill and avoid any possible tubing lockups and it also eases running the completion to target depth. A perfectly straight hole can only be achieved by using a continuously rotating orienter that can rotate clockwise or anti-clockwise without any need to stop the drilling process. Having an orienter module with such capability also maximizes the weight on bit (WOB) which helps to drill a long lateral or a shorter one with high ROP. 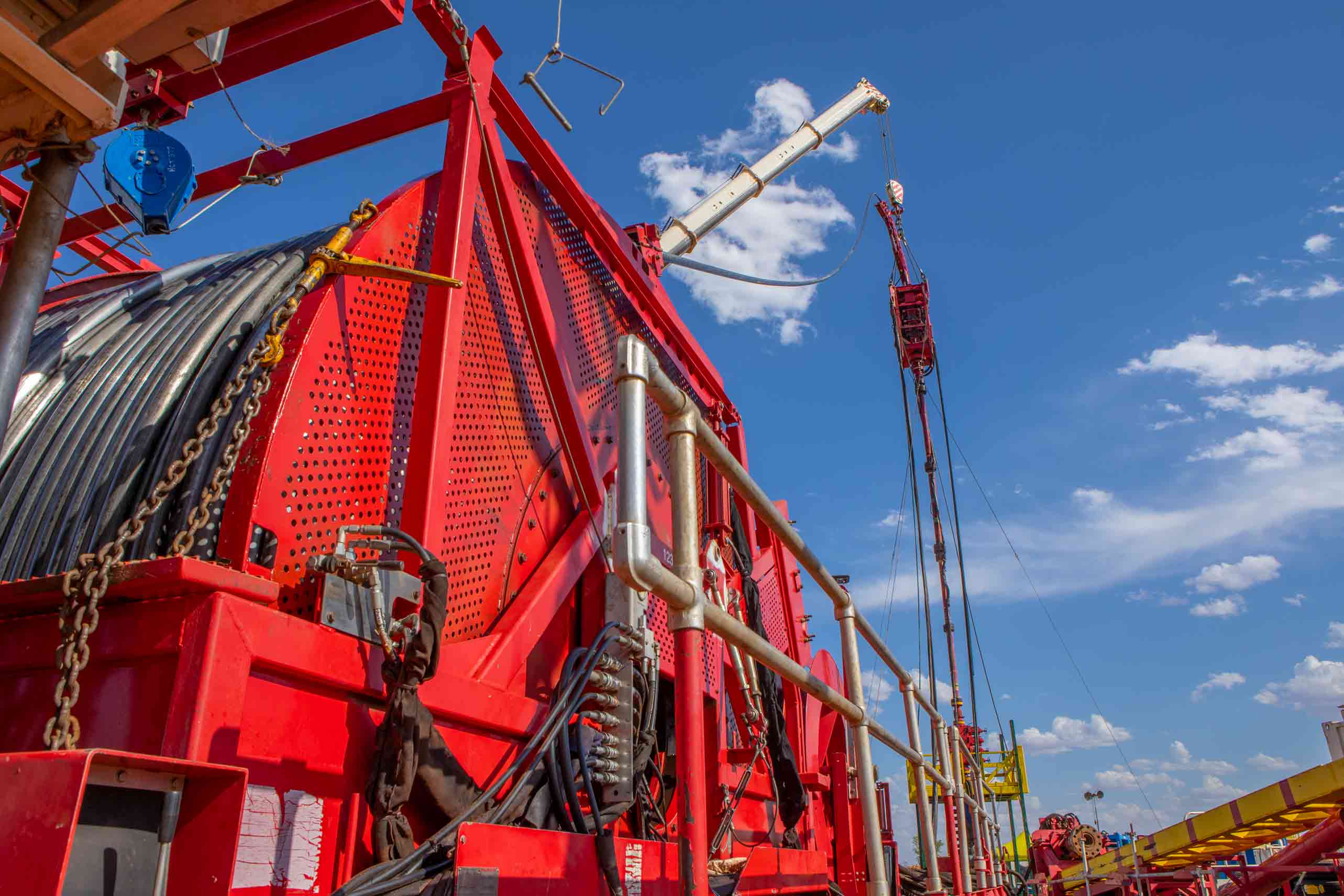 Austin chalk is a well-known reservoir which has a fantastic history of being a major producing field for many years. All wells targeting the Eagle Ford Shale will pass through the Austin Chalk. Now, as the number of wells in the Eagle Ford that are reaching the point where they will need to be abandoned is increasing, it is feasible again to use the existing infrastructure already in place and re-drill Austin Chalk reservoir to take advantage of any additional barrels that can be brought to the market.

One of the biggest challenges of drilling the Austin Chalk for many years used to be fluid losses. It is a highly fractured reservoir where large fractures can be intersected resulting in significant losses of the drilling mud. These losses can add up to a significant fraction of the well cost as the oil-based mud is quite expensive. Operators have to consider these possible losses when budgeting for the year, however, reducing the variability in mud costs would allow the operator to use its capital more efficiently.

Using a CTD package, an operator can achieve higher control over pressures because of the choke and also use simpler type mud fluids. For example, a solids free brine, such as 4% KCL brine-based mud with xanthan gum as the viscosifier and starch for filtration control would be suitable. This type of fluid weighs around 8.6-9.0ppg and in case, any additional pressure is required to exceed the reservoir pressure, it can be applied at the choke. The choke can be opened when circulating pressure needs to be brought closer to the reservoir pressure to lessen the losses. The choke can even be closed for a period of time until the losses are cured. When it comes to pressure control, the flexibility and adaptability on coiled tubing is considerably more than on a conventional rig.

When a highly permeable fracture is drilled through, a circulation issue may arise, so switching to underbalanced drilling as soon as that happens, would solve the fluid losses issue, and protect the productivity of the fracture. This alternative strategy allows the formation to be protected from damage and the production to be maximized by drilling underbalanced. In case, no fractures are detected, then the well can be drilled as normal at a low cost without the use of nitrogen equipment.

It is highly possible to achieve a lateral length of over 7000 ft in the Austin Chalk formation utilizing the suitable equipment and designing a comprehensive drilling plan.

To view the full article, please visit:  World Oil or contact us