Geosteering CTD Using The Drill Bit As A Sensor​ 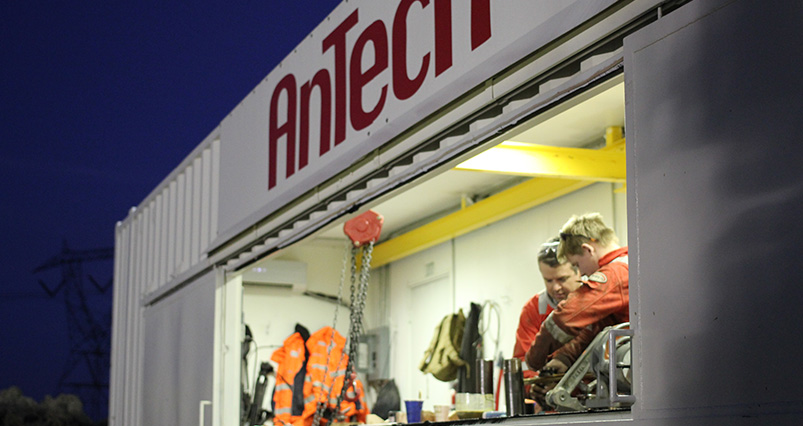 The precise depth at which a target formation will be penetrated by the bit is never known with certainty until the well is actually drilled. Yet, maximising recoverable reserves depends on optimal wellbore placement. This, in turn, depends on reacting instantaneously to the newly confirmed location of a formation’s boundary.

Mechanical Specific Energy, first proposed by Teale* in 1965, provides a way to characterise the energy required to drill a length of hole in a formation. It follows that, as the drill-ability of the formation changes, so does the energy required to drill it. Therefore, a plot of MSE vs Depth for a section of hole is a very good proxy for porosity. Additionally, as an at-bit measurement, it is an extremely useful tool for navigating vertically limited formations.

Historically, downhole Weight-on-Bit and Torque were derived from surface measurements, with corrections applied for the effects of buoyancy and friction. The error, inherent in these empirical corrections, was usually greater than the signal in the subtle changes in MSE due to differing formation characteristics. The latest generation of Coiled Tubing Drilling BHAs, featuring integrated downhole sensors and high speed wired telemetry, provide a technology platform that now makes high definition MSE measurements possible, opening a new window on the downhole environment as drilling progresses.

The technology has sound, intuitive footings. Picture yourself a passenger in a moving car. Even with your eyes closed, you know the type of road you’re travelling on (freeway, city street, dirt road) by the road noise you can hear. Anyone who has ever drilled a hole in a masonry wall to hang a picture, or fit shelves, will have experienced the principle at first hand. Without even thinking about it, the person holding the drill is aware when he is drilling the plaster, when he is drilling brickwork and when/if he hits a void in the brickwork.

Consider now a motor turning a drill bit which drills a hole in a sample of rock. We can measure the power input to the motor as the hole is drilled to gain an understanding of the type of rock we’re drilling. If it was an electric motor, we would simply measure the voltage applied and the current flowing during drilling and multiply them to get the instantaneous power. For a positive displacement mud motor, it’s slightly more complicated, but it can be done. If differential pressure and flow rate can be measured, then, given knowledge of principal operating constants for the motor, an expression for power in terms of pressure and flow rate can be written.

If we were then to integrate this power as the hole progresses, we would have a value of energy expended per foot of hole drilled and would therefore have a relative indicator of the changes in formation being drilled.

In this fashion, by continually monitoring torque, WOB, pressure and ROP, AnTech’s RockSense provides information about the formation being drilled, as drilling proceeds. The high data rate offered by wired telemetry, permits multiple measurements to be made per foot of hole drilled, yielding inch level resolution in the processed signal.

Highlighting the need for a new Geosteering method 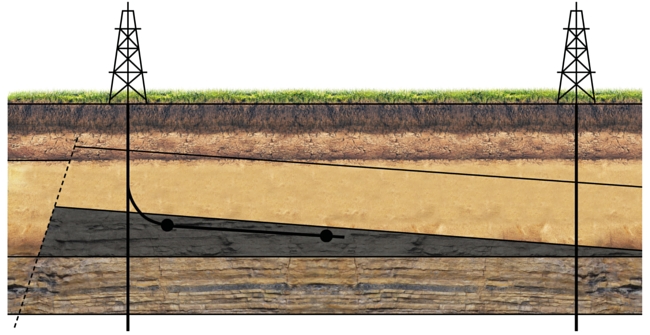 Figure 1a. Planned side-track well based on linear interpolation of formation tops 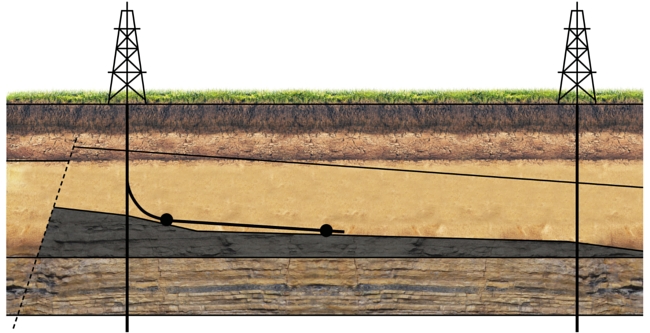 Figure 1b. Actual side-track well misses formation due to a non-linear formation top depth between the vertical wells

Look at Figures 1a and 1b. Based on formation tops observed in previously drilled vertical wells, a horizontal side-track is planned based on a casing exit depth, a build rate that will land the lateral the required distance below the top of the reservoir and a target inclination which will track the top of the reservoir. A modern directional Coiled Tubing Drilling BHA will be able to feed directional information (inclination and azimuth) to the surface as drilling proceeds which can be combined with bit depth to provide an accurate estimation of the borehole’s position in 3D space.

But, if the top of the reservoir formation is not flat – more like that in figure 1b, then navigation by dead reckoning alone will land you in the seal, not the reservoir. The solution to this problem is the well-established art of Geosteering.

Although these sensors are mature, with good reliability and consistent performance, a significant feature which affects their use in Geosteering is the position of the sensor along the BHA.  The BHA is constrained by its nature to be a long, thin tube. Maybe 3 inches in diameter and many tens of feet long. At the bottom of the BHA is the bit, immediately above this, by necessity, is the mud motor, occupying 10-15 ft of BHA length, and the directional sensor package is normally located immediately above the BHA. This means that sensors sensitive to identifying characteristics of the formation are constrained to be at least 20 – 25 ft behind the bit.  The significance of this in Geosteering terms is illustrated in figures 2a and 2b. This means that a change in formation characteristic won’t be visible to the sensor until a further 20-25 ft of hole has been drilled in the formation. As figure 2 illustrates, this implies a corresponding delay in informed steering decisions, with the consequence that the formation of interest may be exited before a steering correction can be made.

If the additional vertical depth traversed during the delayed steering correction happens to be water bearing, the negative impact on lifetime productivity of the well can be significant. Even if there is no productivity impact, time spent drilling unproductive formation will impact the project’s bottom line. As figure 2b illustrates, the ability to make a steering decision at the time that the bit penetrates the formation results in a much better chance of staying within the target formation. 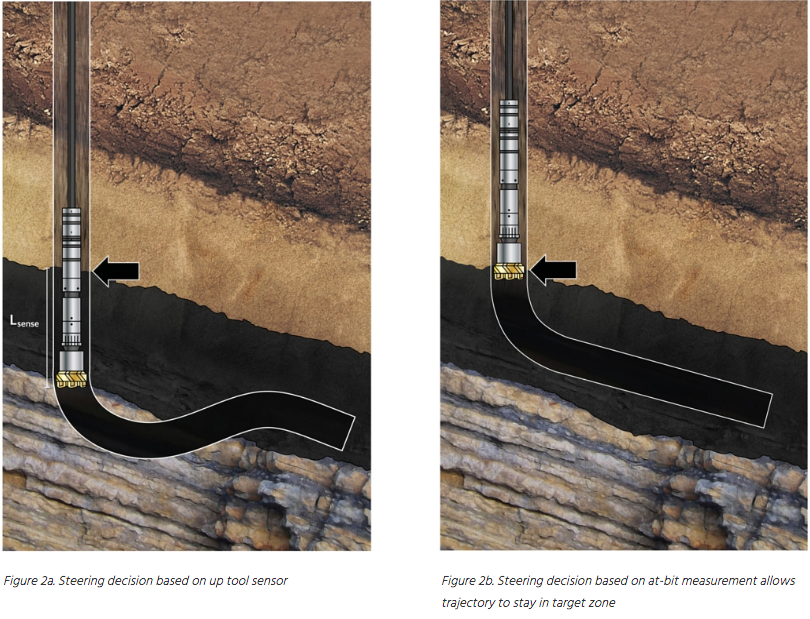 Geosteering can also be informed by the analysis of cuttings. However, the time taken to circulate cuttings to surface, capture them and prepare them for analysis means a delay, similar to that described above. . Meanwhile, the bit continues to turn, meaning that, once again, the formation of interest is substantially penetrated before positive confirmation is received, reducing the TVD available to successfully complete a steering action. Dispersion of cuttings in the annulus (different sizes and densities travel at different speeds) can also adversely affect depth resolution.

Exploring the solution in practice

Although RockSense is available as a real time service to inform navigation decisions while a well is being drilled, the system works just as well with historical data sets.

Two data sets have been chosen for analysis, based on the availability of conventional logs from adjacent wellbores for corroboration.

The first data set is from a Coiled Tubing Drilled side-track of a well in North America. The well was in a densely drilled locality and open hole logs for nearby vertical wells were made available.

No horizontal wells had been drilled in the area previously and the objective was to production through increasing reservoir contact. The operator used 3D seismic to evaluate the formations and identified a subsurface ridge that could be acting as a trap. The well path was planned to pass approximately 15 ft below the formation top and track the formation by holding inclination. The oil/water contact was believed to be 40 ft below the formation top and, if it was entered, would significantly impact the well economics. Gamma ray sensors were used for depth correlation because relying on seismic depth alone would not provide the depth accuracy required. The hole section was drilled using single phase fluid in the build section.

Running the RockSense software on the data gathered during this job revealed compelling similarity in the shape of the density log for nearby wells and the RockSense trace when plotting porosity against TVD, as can be seen in Figure 3.

Figure 3. Compelling similarity between the shape of the density log for nearby wells and the RockSense log when plotting both quantities against TVD (Note that the RockSense scale is offset in this view)

The second data set involves Underbalanced Coiled Tubing Drilling in a shale gas well, also in the United States, which is illustrated in Figure 4. In this instance, a 4¾” lateral was drilled using Underbalanced Coiled Tubing Drilling with a mixture of up to 40% nitrogen to minimise formation damage. It was intended that the wellbore should stay within an identified formation layer. Post processing the historical data using the RockSense software clearly identifies a substantial footage drilled below the target formation. Were that lateral to be drilled today, with real time RockSense on screen, a more reactive steering strategy could have been followed. In this more reactive strategy, RockSense would be used to identify crossing the formation top, at which time the trajectory would be adjusted to follow the formation dip, with RockSense being monitored as a guard against exiting the formation. 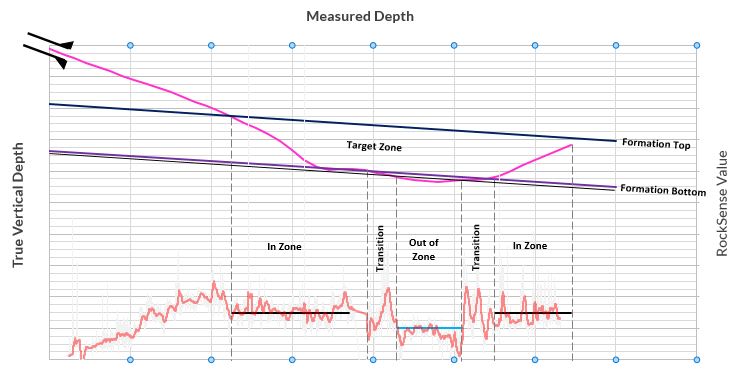 In summary, RockSense delivers an at-bit bed boundary identification service of a type not seen before. The service is delivered in real time, as the hole is drilled. It is made possible by the low latency, high rate transmission of data from high fidelity downhole sensors. The parameters measured are representative of conditions at the bit – not 25 feet behind the bit, giving the driller a 25 ft head start in making his steering decisions. This potentially disruptive service means he can deliver an optimally placed wellbore, with more feet drilled in the target zone, resulting in improved lifetime productivity, higher initial production and substantially improved project economics.