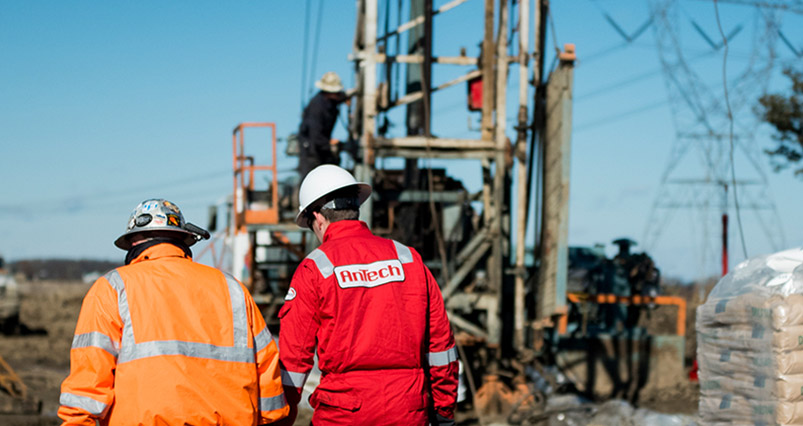 Andrew O’Brien, AnTech,UK, explains why CTD applications are so relevant to today’s oil and gas industry.

Directional coiled tubing drilling (DCTD) has become a mainstream drilling activity in numerous parts of the world and modern DCTD is nearly 30 years old. Awareness of the reasons for using DCTD and its range of applications is, however, sometimes limited. DCTD has been trialled or used in many areas by most medium and larger operators, but has tended to be concentrated in specific locations or used by operators who have built up experience with the technique.

Most will be familiar with the main applications of DCTD: Brownfield through tubing re-entry work, underbalanced drilling and short radius profiles. However, there are some other less well known reasons for selecting the technology as well as several new applications that have moved from the drawing board into development, and will soon be available to the industry, further increasing the scope and capabilities of DCTD.

DCTD technology combines coiled tubing drilling with directional drilling, utilising a steering assembly with an ‘orientor’ to navigate the bit in the required direction and inclination. Modern DCTD has evolved significantly since its origin in the early 1990s, with orientors now powered with an electric logging cable run inside the coil tubing, which also conveys MWD/LWD signals between the downhole tools and surface. This wireline enabled coil allows for real time adjustment of orientation, while the internal e-line cable allows high rate, real time drilling and logging data to be transmitted to surface without drilling or flow interruption, as there are no pipe connections during drilling or tripping. The absence of pipe connections reduces time spent running and pulling pipe, as well as time spent taking surveys, and means that two phase fluid flow (if used) is uninterrupted. Reduced handling of pipe, along with a continuous circulating system, increases safety at the wellsite, resulting in fewer manual handling incidents and NPT.

These characteristics make DCTD especially suitable for pressure sensitive shales or depleted wells requiring underbalanced operations, underground gas storage wells that require minimal skin damage and unconventional gas wells.  Some CTD bottom hole assemblies are short and can drill very high builds and turns, making them ideal for targeting complex wells with difficult to reach, faulted or thin producing horizons. The precision and flexibility that this technology offers frequently means that many horizontal laterals are drilled from the same original well bore, increasing the wells drainage area by producing from multiple formations in the same reservoir.

Moreover, the footprint of a CTD spread is significantly less than a conventional rig spread for the same application. This low environmental and noise impact often allows the technology to take precedence over conventional rigs in areas that have high environmental or land owner concerns. The smaller rig is also suitable in Arctic zones where the rig and work area may have to be permanently covered or heated.

Another key consideration is cost. By re-entering a well and sidetracking through existing tubulars, DCTD saves the significant cost of pulling a completion or re-drilling the upper sections in a new well. Additionally, existing pads and facilities may be reused, resulting in further savings. As onshore and offshore fields mature and have junked or poorly performing wells, the number of wells that can be ideal candidates for re-entry and DCTD campaigns are rapidly increasing. It should be noted that Brownfields hold the most reserves worldwide and the current recovery factor is estimated as little as 30%. In the current climate, many operators are looking to improve and extend existing production with enhanced oil recovery and techniques such as DCTD for re-entry of wells, rather than drill completely new wells.

CTD Case Histories Around The World

To highlight the variety of applications and reasons for using DCTD the following case histories have been included;

Increased gas feedstock was required to supply increasing energy use, to reduce liquid feedstock use and reduce CO₂ production.

An initial four underbalanced (UB) wells were drilled after a study had concluded that the only practical way of increasing drainage in the highly fractured depleted field was high angle re-entries from existing wellbores. Wells were 150˚C and with high H2S levels. The drilling fluid was Nitrified water with foam sweeps.

Initial wells showed a 73% net increase in production of gas (over non-intervention field production rates). A second phase of four wells showed a 125% increase in production. Three final wells were then rejuvenated. In total, fifty laterals were drilled on the eleven wells (one well with eight laterals alone). When drilling UB, flowing the wells while drilling provided US$170 million dollars of condensate/ gas production. The project cost was paid back in 2½ months of field production due to additional revenue from producing whilst drilling. Due to a high safety focus and detailed planning, 328 000 man hours were worked without an LTI. 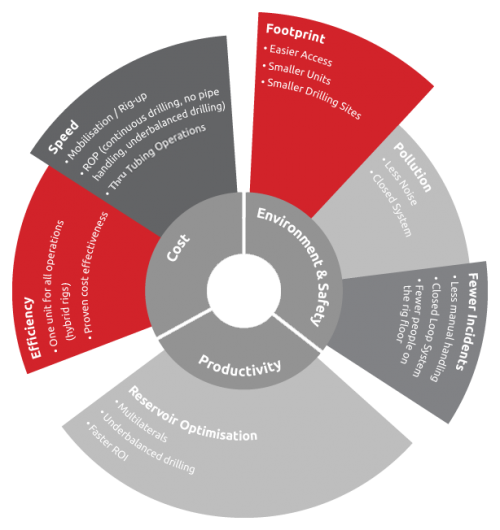 Improved field maintenance on two gas storage reservoirs. Previous conventional and unconventional attempts to stimulate the wells in the fields were not satisfactory and the reservoir thickness was only 4 ft to 9ft. One location required a rig with a small footprint and low environmental impact.

One well was drilled with up to 84°/100ft build with UB and freshwater/polymer plus N2 to obtain a 180ft lateral, resulting in a 840% increase in gas deliverability. The second field drilled a 698ft lateral with 650 psig underbalance and 28˚/100 ft build rates, build rates were reduced to allow a completion. Testing three months after completing indicated that the horizontal well extension had yielded an 8000% increase in deliverability from the well.

The platform had minimal space and could not undergo any changes or crane upgrades, so DCTD was considered suitable. Wells were designed to use the existing completion in order to reduce time and cost.

Four wells were drilled with deep kick off points to avoid problematic shale sections and were successfully completed. Lessons learnt from the first two wells greatly increased the performance in the later wells.

Short radius wells with 2000 - 3000 ft laterals were drilled, removing the requirement for traditional long radius profiles and well kill complications. DCTD has simplified wells and reduced difficulties above the reservoir.KSA has avidly adopted the DCTD technique since this case history.

To view the rest of this article please contact us