Cryogenic vs Membrane Nitrogen in CT Applications: The Big Picture​ 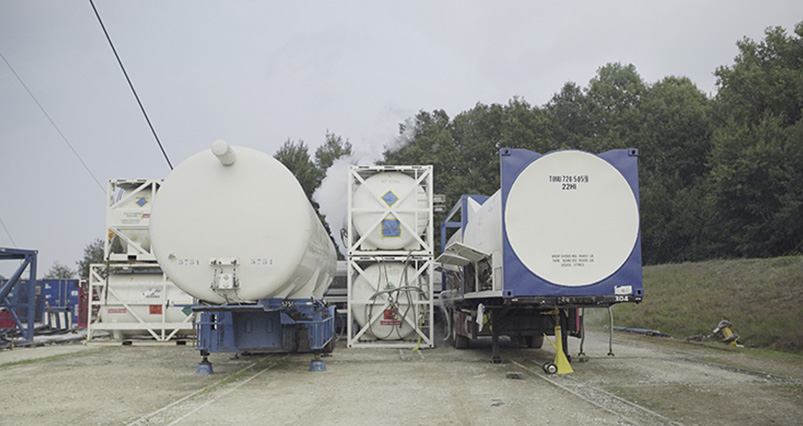 For many drilling operations within the upstream oil and gas industry, nitrogen is an essential consumable and is required in significant quantities. In particular, underbalanced drilling operations require nitrogen to be added to the drilling fluid in order to reduce the hydrostatic pressure sufficiently to prevent fluid loss into the formation. The conventional method of supplying nitrogen gas to drilling operations is by utilizing cryogenic technology to transport and store liquefied nitrogen. Nitrogen is transferred from specially insulated vessels into wells using cryogenic pumps, which maintain the low temperatures required. However, the technology is problematic for several reasons. Large quantities of nitrogen are often consumed due to the requirement of high pumping rates, as well as substantial wastage. Not only is it expensive to procure such volumes of nitrogen, but it can often be difficult to source the required quantity in proximity of the wellsite. This results in higher transport and storage costs, as well as the associated environmental impact. Moreover, the use of nitrogen at extremely low temperatures (-196 degrees centigrade) poses safety risks to anyone coming into contact with it during transport or on the wellsite.

For many years, an alternative method for the provision of nitrogen in certain drilling operations has been to generate nitrogen gas in-situ at wellsites using nitrogen generation units, with ambient air as the raw input material. Within these units, air is compressed, cooled and dried, before being cleaned and heated for carbon absorption and membrane filtration. Activated carbon and particulate filters remove organic contaminants and solid particles down to 1 micron, before the air is further separated by sophisticated membrane filters to produce a ‘clean’ nitrogen gas. In-situ nitrogen generation has several key benefits over conventional cryogenic nitrogen, the most obvious being that one self-contained nitrogen generation unit is all that is required to provide an unlimited supply of nitrogen directly at the wellsite, eliminating the need for costly and logistically challenging transport and storage. In addition, the overall volume of nitrogen required can be reduced due to lower pumping rates, which, in conjunction with the reduced infrastructure required, reduces overall environmental impact. Finally, unlike cryogenic nitrogen, there are no safety implications relating to the handling and transport of in-situ generated nitrogen. However, in-situ nitrogen generation does not produce pure nitrogen gas. In fact, nitrogen gas produced by this process can contain up to 8% residual oxygen components, and this can prove highly problematic for certain downhole applications.

Coiled Tubing Drilling (CTD) has long been the desired technology for re-entry operations into depleted wells, thanks to its proven financial, environmental and technical benefits over conventional drilling. As similar such benefits can be found in the use of in-situ generated nitrogen gas, it is common for this technology to be used in coiled tubing operations.  The problem arises when coiled tubing comes into prolonged contact with residual oxygen component in nitrogen produced by membrane filtration in-situ, which, under downhole pressure and temperature conditions and with high fluid velocity, can create severe corrosion of the coiled tubing material. Moreover, the effects of this corrosiveness are exacerbated in operations where fluid systems such as completion brines and acids are used. Not only can the coiled tubing be susceptible to corrosion, but also the bottom hole assemblies (BHAs) can stop functioning due to blockages caused by build up of corroded metal from the coiled tubing. Therefore, despite its benefits over cryogenic nitrogen, in theory, the use of in-situ generated nitrogen can be extremely problematic.

When operating membrane units well below their rated capacities they can produce relatively clean nitrogen with low oxygen levels.  Unfortunately, this is often impractical and will not meet the nitrogen rates required for the operation. Fortunately, commercial chemical inhibitors are routinely used to reduce the rate of corrosion of the coiled tubing. Early studies indicated that the most successful chemical inhibition strategies included the combined use of oxygen scavengers, phosphate or organophosphonate ester and filming amines. Unfortunately, such studies have been unable to create test conditions that accurately replicate the downhole conditions experienced in underbalanced drilling, and as such these strategies cannot be considered a reliable solution to the problem of corrosion in CTD applications. However, more recent studies that have attempted to create test methodologies using high pressure/temperature conditions have been successful in identifying chemical strategies that provide significant inhibition against the oxygen corrosion of coiled tubing experienced in underbalanced drilling operations. A phosphate ester inhibitor formulation with a controlled near-neutral solution pH and additional bivalent cation was demonstrated by McNealy et al to be capable of producing a stable protective film without the production of corrosion product scales known to cause problems in CTD operations. Therefore, it can be recommended that in-situ generation of nitrogen gas can be an effective solution (and indeed more beneficial than the use of cryogenic nitrogen) in underbalanced applications providing it is either used in a certain way (at lower capacities), or that chemical inhibition formulations against corrosion are carefully selected according to the specific conditions.