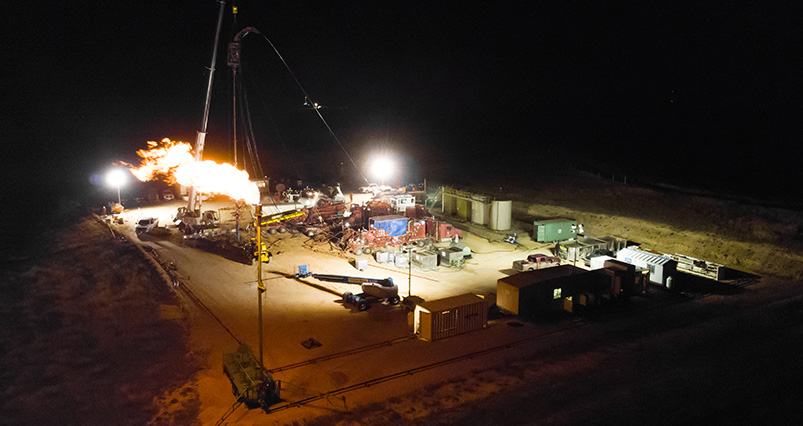 This blog focuses on the capabilities of Underbalanced Coiled Tubing Drilling (UBCTD) demonstrated in a project led by AnTech in the Texas Panhandle. The project was a two well re-entry campaign, aimed to intercept fractures and access untapped reserves to boost production. Underbalanced drilling was performed  to prevent overbalanced conditions that can have a significant impact on production. A stable underbalanced system allows reservoir characterization while drilling and it is especially important when working with a two-phase fluid.

The wells under consideration were gas producers with condensate and water also being produced. The areas of particular concern were the stability of the build section in the overburden above the pay zone and the risk of hitting water-bearing fractures in the horizontal section within the reservoir. For these reasons, a great deal of time and effort was given to planning the operation in order to drill the wells as planned to avoid any surprises and mitigating challenges. An expandable liner was kept on standby as a contingency for the wellbore stability and inflatable plugs were made available in case of hitting waters.

The parties involved in the project were:

The role of aggregating the data from all parties involved was also taken by AnTech, by deploying digital technologies in the form of wellsite data acquisition and office support for data analysis and downhole sensors. This allowed all parties to have a complete picture of what was happening in real-time on the wellsite and the speed of decision making could thus be improved.

A workover unit was used to pull the tubing out and carry out the casing exit operation in both wells. The first well was then entirely side-tracked with Coiled Tubing Drilling. The build section of the second well was instead drilled and cased conventionally due to wellbore instability caused by shale intervals; the horizontal lateral was then drilled with Coiled Tubing. This project is a good example of the importance of thinking of an UBCTD campaign as a whole, in which the Return on Investment (ROI) was maximised by using the technologies where they were best suited.

AnTech’s gyro technology was used to pass through the window in the first well. It provided Gyro While Drilling (GWD) capabilities and was used to take a survey and orient the bent housing motor to pass through the window. The technology is incorporated in the BHA in order to assist with passing through windows without getting stuck and for dealing with inaccurate magnetic surveys when close to the existing casing.

Productive fractures and faults were identified by utilising RockSense in combination with production data. The well proved productive until a water bearing fracture was intercepted. It was decided to stop drilling and run two inflatable plugs to seal off the water bearing fracture. RockSense identified the exact location of the fracture in order to set the plugs as close as possible.

The project showed that UBCTD, combined with aggregation of digital surface data, can be run successfully in the challenging US land environment. It also validated the technology and provided a proof of concept to be taken forward to the Operator’s future projects.