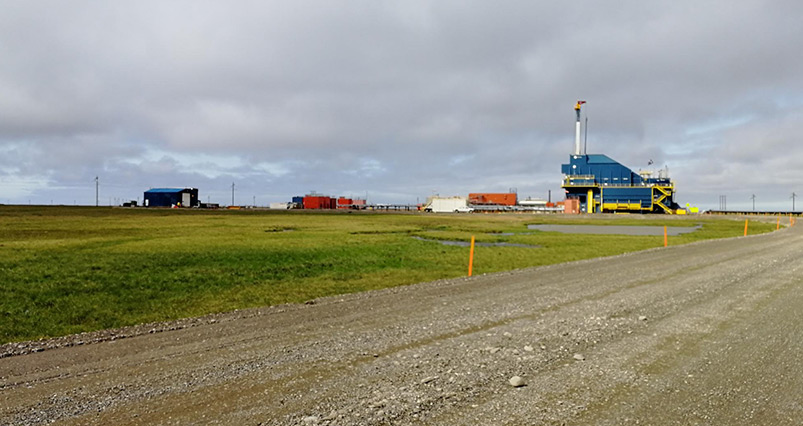 The two wells under consideration in this case study were injection wells. Extended reach laterals in a sand formation were planned with the primary objective being to support production from other wells in the field.  Extended reach was critical for economic viability of the project with horizontal laterals exceeding beyond any length achieved previously. CTD was seen as the best way to drill the reservoir because of cost advantages as well as the ability to drill at-balance using managed pressure drilling to keep the wellbore at a stable bottom hole pressure. The key objective was to drill as far as possible helped by a very straight hole.

For the project to be economically viable, it was determined that laterals of over 6000ft were required. Tubing forces modelling was used to test the sensitivity of a variety of ways to increase lateral length. Various options were modelled and compared to a base case of 2-3/8” CT. These included the use of an extended reach tool, improving the friction factor in cased hole and open hole, increasing the tubing diameter and drilling a hole with reduced DLS.

The relative effect of all of these options was compared and the largest improvement in reach is created by reducing the DLS of the drilled borehole. The straightness of the borehole is a function of the type of orienter used. The most advanced orienter on the market is a Continuous Rotation Orienter (CRO). Continuous rotation drills a straight hole by pointing the bit in all toolface angles as it rotates in the wellbore. So, even though the motor has a bend, it never settles in one unique direction.

It also enables the build section and a straight tangent section of a well to be drilled in one run, without having to pull to surface to change the bend.  This adaptable and precise control also leads to a smooth build section which also helps extend reach.

A triple casing exit was performed as planned for both wells by milling through the 4.5”, 7.0” and 9.625” strings with two milling runs required for each exit. After the triple window was milled, the hole was circulated clean and the BHA pulled to surface. The BHA was changed to a steerable drilling one and tripped back in to drill the build section.

Tight directional control was maintained with the as-drilled trajectory closely matching the plan (Fig 1). This was maintained with drilling rates in the order of 180fph where an error in steering can quickly lead to significant deviations from the planned path. In the latter stages, friction reducer was added to the drilling fluid to improve WOB.

These were the first triple casing exit performed with CT on the North Slope.

Longest lateral section drilled in a 24hr period at 2894ft.

Longest liner run in one run on coiled tubing.